The local little charity, Lakeland Wildlife Oasis, across the moss from Burton on the A6 has been badly flooded, and is needing help with the clean up and repairs.

This is a small place, doing important conservation work. This is the park where the globally endangered and rare Snow Leopards cubs were born in May 2014.  One of the two cubs has left to join a breeding programme elsewhere, whilst the other is still at LWO awaiting paperwork which will allow him to move to another breeding programme.

As well as practical help (details when we have them later) they have launched an appeal to raise £5000.

If you can help in any way, please would you do so?
Appeal Link: https://crowdfunding.justgiving.com/jayneestelle-gibbins 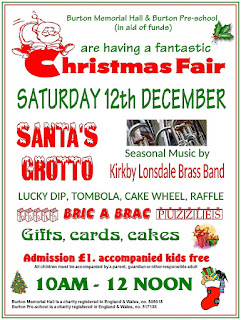 After the Deluge - the Spirit of Cumbria

What a stressful time it has been thanks to Storm Desmond. Here is Burton we escaped relatively lightly. A few wet cellars, some flooded and damaged roads, and a collapsed wall or two, but nothing on the scale of the communities around us.

Seeing many places under feet of water is so shocking. It's hard to imagine what it is like living in a street where the flood water comes up to your chest, or where the West Coast Main Line is under eight feet of flood water.

Some 5,000 homes across the county have been flooded, which means all those families are now either staying with friends and relatives or have taken shelter on one of the refuges around the county.

The assistance given by the emergency services, by volunteers from organisations such as RNLI, Bay Search and Rescue, the Red Cross, the Salvation Army, the mountain rescue teams and many others, plus the support given by the Army, has been invaluable. They have worked tirelessly since the Storm began, and everyone in the county owes a huge debt of gratitude to them all.  Without them it would have been so much worse.

Aid has also come from all over the country. Kind people throughout the UK have been contacting local groups, offering clothing, bedding, Christmas gifts, food and drink, and much more besides, to those who have lost so much in the floods. Their generosity is overwhelming and much appreciated.

It will take millions of pounds to effect repairs to all of the properties damaged, to mend all the roads ripped up or washed away, to replace the bridges destroyed. Just cleaning the mud and water out and disposing of damaged items will be a huge task. Kendal Lions have provided a huge quantity of cleaning materials for those affected in Kendal. Supermarkets ASDA and Morrisons have been sending food and clothing to the refuges. Hundreds of local businesses have offered help without being asked. The community spirit is strong in Cumbria, but it will take more to rebuild our towns and villages.

The Cumbria Foundation's Cumbria 2015 Flood Appeal was launched over the weekend, and has, as of today, raised more than £500,000 towards its target of £2 million, which will go to help anyone in the county who needs help as a result of the flooding.

If you can help by making a donation to the Appeal, you can do so via their Just Giving webpage here http://campaign.justgiving.com/charity/cumbriafoundation/cumbriafloodappeal2015

If you need help just ask, if you can help just offer. http://www.spiritofcumbria.co.uk/ And thank you to everyone who does.

Book: Diary of a Border Collie Pup
by Elaine and Edd Hindson

If you have ever wanted to understand what a Border Collie pup thinks, this is the book for you!

The answers are all here in this enchanting diary, as this wee pup gets to know the village and meets lots of new friends on his walks with Edd.

Available now from Amazon: £3.99 in paperback

Annual fun and fund-raisers for four groups in the village, this year's Christmas Bingo details are:

All four sessions follow the same format: Doors Open at 6.30pm, eyes down at 7.30pm.

Drinks, sandwiches and cake on sale at each event.

Please see the poster below! 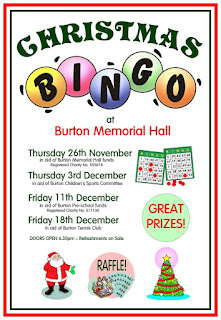 VACANCY at local farm: "We are in need of a part time farm worker to cover weekend milking time to feed & bed-up, both days. If you know of anyone could you please pass this on with my contact details (07852 240778) thanks."

I was excited to hear today that Whin Yeats Dairy at Hutton Roof are making cheese from the milk from their dairy herd. I love cheese, and having it made just a couple of miles away is even better, so I'm eagerly awaiting the first batch's arrival.  It will be on sale at various farmers' markets in the area, so watch this space for more news. You can also follow Whin Yeats Dairy on Facebook, Twitter and Google+. 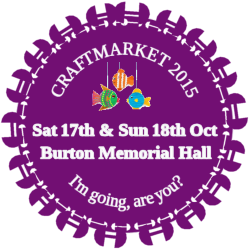 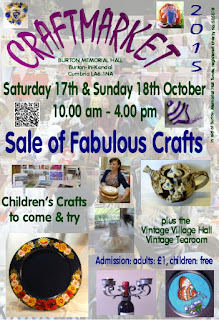 Classes and promises to date are as follows:
Classes
Children’s classes’. Up to yr 2 and yrs 3-6
Entries taken from 10.00hrs and closed at noon for judging to commence afterwards. Auction of promises/entries to commence at 2pm, we look forward to another brilliant day.


There will be a ducking stool offering you a chance to dunk a local “Lady” plus bouncy castle and kids entertainment.

Fly only session on the River Bela Ian Hunt

Side of Lamb. Mark Blease.

Selection of homemade jam and marmalade. Mollie, Sheila and Rachel.

2 gardeners for half a day. Julian and Moira Rowley 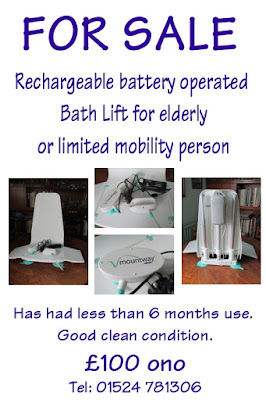 A Celebration of the Music of Simon and Garfunkel

A Celebration of the Music of Simon and Garfunkel is coming to Burton Memorial Hall on Friday 31st July.  As well as great music performed by Tim Chu and Ian Bailey, there will be a bar in aid of Hall funds.  Tickets are £12 per person and are on sale (cash only) at Burton Village Store, or via the musicians' website here: http://classicsingersongwriters.co.uk/sandg/ 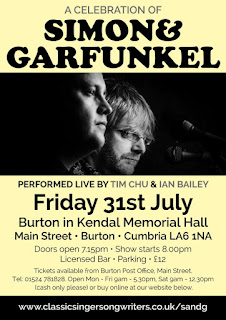 Come and enjoy a feast of strawberryness at the Memorial Hall. We will have a wide choice of strawberry delights: cakes, gateaux, meringues, ice cream, milkshakes, strawbs and cream, and much more!

In aid of Hall funds. (Burton Memorial Hall is a charity registered in England &Wales, no. 505018) 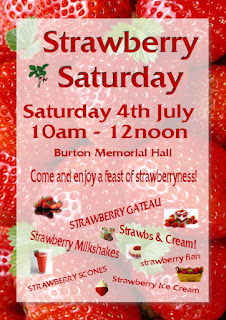 Now in its 11th year, Burton-in-Kendal Art & Craft Society's annual exhibition continues to be a popular event for locals and visitors alike. With over 100 exhibits there is plenty to see and it's a great opportunity to purchase original artworks from local artists at affordable prices.

This year the guest artist is Olympic Artist, Christine Rooney, who will open the exhibition and display some of her own unique work.

There will also be a display by the Children of Burton Morewood School, who have been busy creating artwork inspired by Andy Goldsworthy. 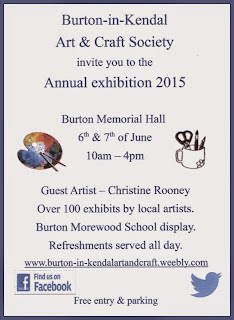 There will be a home-made cakes stall (Yum!), Bring and Buy, coffee and cake, and live music!

The event is in aid of DEC (Disasters Emergency Committee) and the Mission Aviation Fellowship, to support their work in Nepal after the recent devastating earthquakes.


BRT exists to manage the outdoor recreation facilities behind the Royal Hotel. The present Chairman and Secretary are no longer able to carry out their roles due to family commitments and are appealing for new Trustees to step forward and assist in the managing of the facility. The Trust is non-profit making but it must raise enough funds annually to run the facility and maintain a ‘sinking fund’ to cover larger replacement costs.

The roles are not onerous and can be very rewarding, especially where there a few willing helpers to assist. We have Tennis Club members who take on the bookings and the cleaning of the facilities and we always get a number of ‘regular’ and other volunteers to help at the annual 10K and Fun run. This annual event is the main fundraiser and we desperately need help to run it this year.

If no-one comes forward in May, then very sadly, the Trust will revert to the Charities Commission and BRT will cease to exist – the lease will foreclose – and once it’s gone, then it’s gone.

Since it’s opening, some 15 years ago, other villages have built their own Multi-Use Games Areas (MUGAs) and we do not get the bookings that we used to do. Nonetheless, it is an important village asset and we are lucky indeed to have such a facility right in the centre of the village – please let’s not lose it.

The next event in aid of Hall funds is a Fashion Show on Thursday 23rd April, 7pm.  Tickets on sale at Burton Village Store! 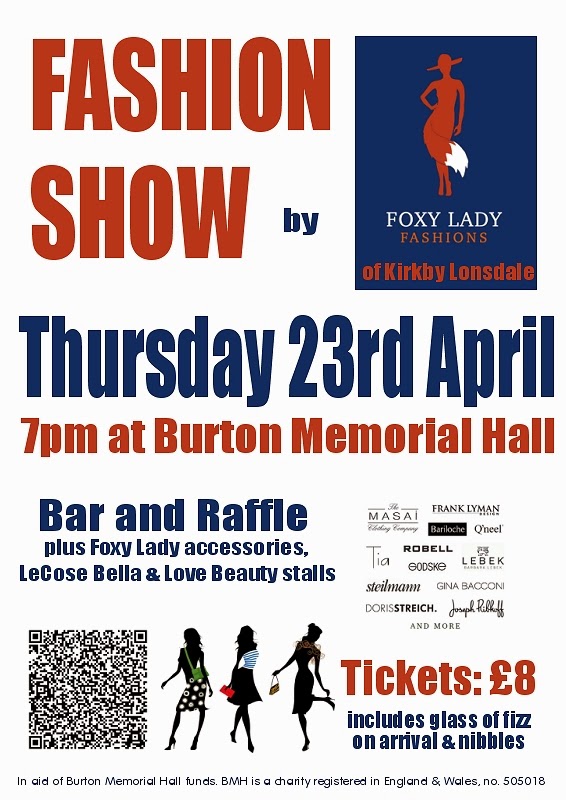 Great excitement this week as we heard that Burton village can now get superfast fibre broadband. Holme, on the same exchange, has been able to get it for a few weeks now.

We've been checking and it seems that most of Burton village itself has the status message "accepting orders", and fibre certainly gets as far as the kennels on Station Lane.

Holme Mills is "fibre to cabinet but cabinet not yet taking orders so keep checking", Hilderstone is "accepting orders", but Burtlands/Station Inn and out to Moss House Farm are all returning "exploring solutions".

The houses at the very top of Vicarage Lane, Dalton, are also "exploring solutions".

If you are not sure if your line is fibre-possible, do use the checker to see (BT lines only) or contact your telephone provider and ask them directly.

There was great excitement tonight in the King's Arms, with the official opening of the King's Barn accommodation. Extra en-suite bedrooms have been created within the revamped former storage barn, with one having full disabled access and a wet-room, along with an en-suite linked room adjoining suitable for a carer or family.

The rooms can serve as twin beds or wide doubles, with ample hanging space for clothes,a hospitality tray, and en suite facilities including showers and baths.

Cosily warm and tastefully decorated, the rooms are just across the courtyard from the main building and have easy access from the adjacent car park. 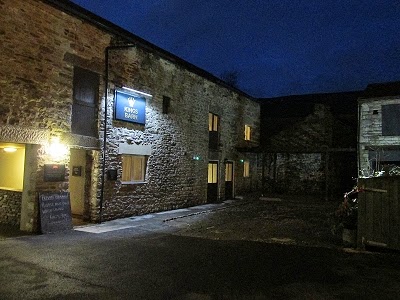 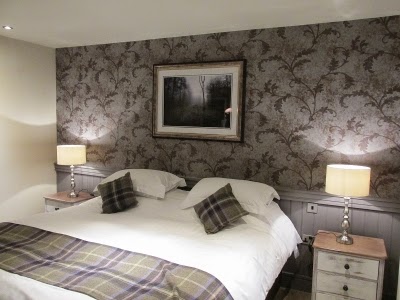 Live Music at the King's this Friday

This Friday, 6th February,  sees the welcome return to the King's Arms, Burton, of the awesome Mickey Jupp and Mo Witham. From around 9pm the duo will be performing a range of songs, many of which were written by Mickey himself, along with some other old favourite tunes.  Come along and enjoy some good live music in our friendly local! 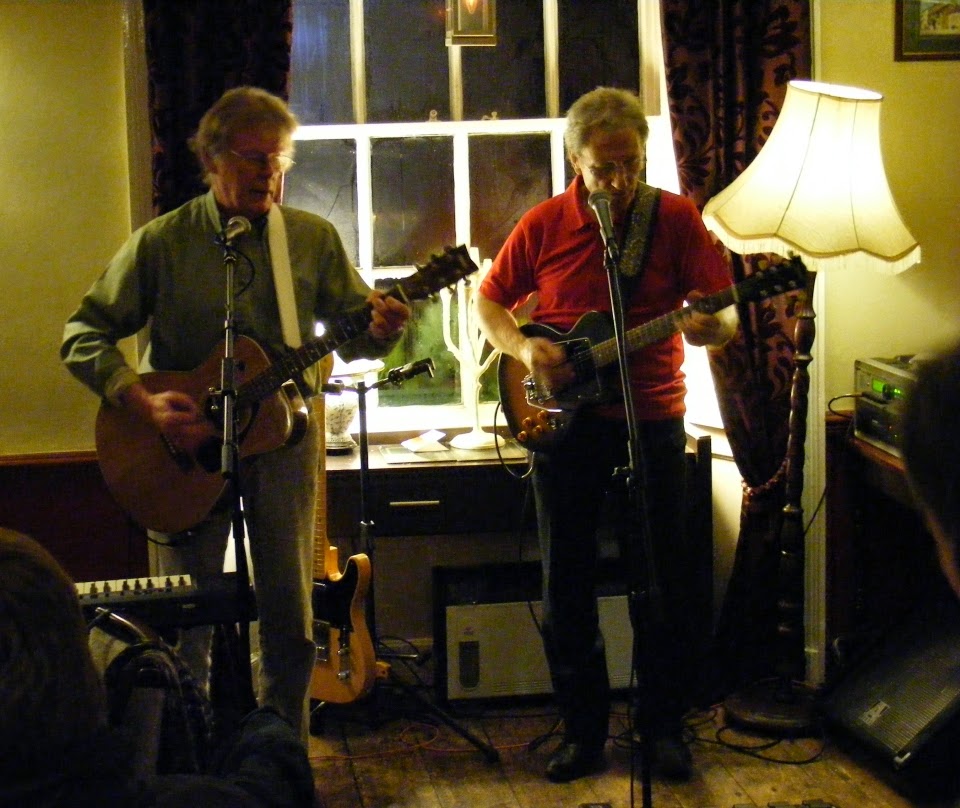 As we start 2015 with leaden skies, torrential rain and high winds, may we wish you all the best for the New Year!  Hopefully things will improve, weather-wise, fairly soon... at least it is not snowing! 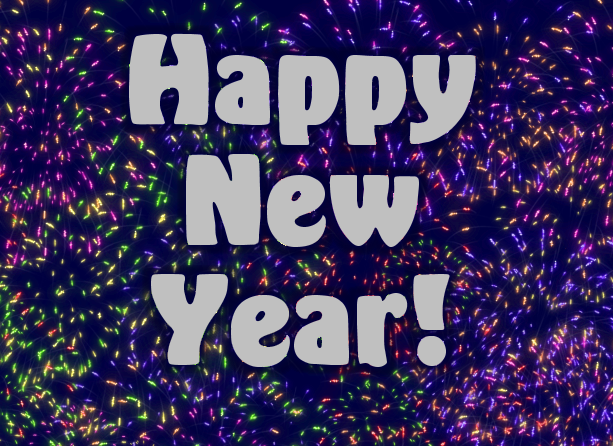